The ‘Dwarf Fortress’ Creators Weren’t in it For Money, But Now They Need It Waypoint In a quiet update to fans earlier this month, the creators of Dwarf Fortress revealed the surprising reason why, after more than a decade, the game was now coming to Steam: “We don’t talk about this much, but for many years, Zach has been on expensive medication, which has fortunately been covered by his healthcare. It’s a source of constant concern.”

Those concerns used to be manageable—people were younger, healthier, problems more predictable. That’s less true now. The chaos of aging often leads to stability by necessity. That includes Tarn and Zach Adams, the brothers behind the purposely convoluted life simulator that’s been singularly developed by the same two-man team for the past 12 years.

“We make very little money when it comes down to it,” said Zach during a recent interview.

Not long ago, Zach and his wife grew curious about a tumor on his nose, a tumor later determined to be cancerous. The plan was to quickly remove the tumor and move on, but that didn’t happen. Instead, it came back—aggressively so. It wasn’t life threatening, but that’s not to suggest it wasn’t serious. Health insurance covered most of the $10,000 surgery, but it still cost Zach an additional $1,500, all while he struggled with the recovery.

“They took off about half of my nose, and they had to take my ear and put it up my nose to make it look normal,” said Zach. 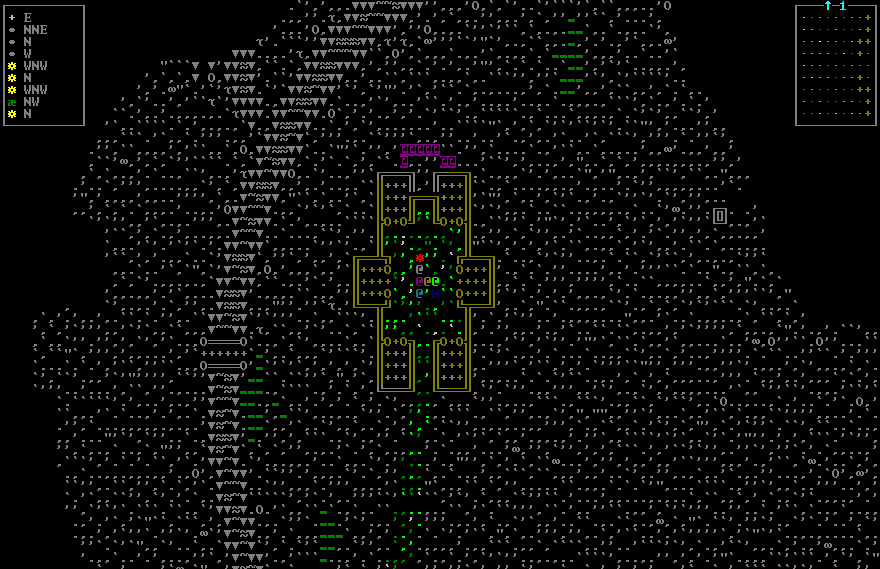 “It was serious,” added his brother, Tarn. “We were like ‘Shit.’ After that was over with, we were like, ‘Well, what if I had to do that?’ Zach is fortunate right now to have a pretty good healthcare plan, and I can’t have the same one because I’m not married to the same person my brother is. [laughs] So the one I’ve got, which is just a regular Obamacare plan, and went ‘Shit, that’s it.’ I can’t have my face reconstructed!”

But cancer runs in the Adams family, unfortunately. Their parents have dealt with recurring bouts of cancer for years. In fact, the insidious disease seems to run through Fairfield, California, the town they grew up in, a spot roughly an hour drive northeast of San Francisco.

“My brother’s dermatologist just happened to grow up in the same town and he’s had all three major types of cancer?” said Tarn. “It’s just not a place to be outside, apparently.”

As a result, 40-year-old Tarn and 43-year-old Zach expect cancer to be an ever present part of their life. And cancer is not the only concern; Zach has been coping with bipolar disorder, in which someone can experience wild mood swings at the drop of a hat, his whole life.

(Zach’s wife, Annie, is publishing a series of blogs about Zach’s multiple health conditions, and how the two of them—the three of them, really, including Tarn—have navigated the life of being an independent game developer while grappling with our awful healthcare system.)

Also, wait, Dwarf Fortress isn’t on Steam? Yes, Dwarf Fortress, which Kotaku’s Gita Jackson recently and accurately described as a “sad alcoholic dwarf simulator,” isn’t on Steam. But Dwarf Fortress isn’t a lot of things. It runs poorly because the code is old and unoptimized. The graphics look comically simple because neither developer can draw. Until announcing this upcoming release, being handled in partnership with The Shrouded Isle’s Kitfox Games, there’s never been a press release promoting the game. They’ve never hired someone to help with this, or any part of the game, because they felt comfortable with what they knew.

The brothers are, arguably to a fault, modest. Tarn only recently bought a smartphone, happy with his affordable flip phone, only to immediately drop it in the Pacific Ocean. (“It didn’t make it. [laughs] So I’ll try not to do that again.”) Their laptops are both incredibly old and cheap—the one they were talking to me on only cost a few hundred dollars. Apple’s stylish MacBook Pro, the laptop I see so many developers working on, starts at $1,300.

And here’s an easy assumption: a popular indie game results in the developers making a lot of money. It’s happened—Super Meat Boy. Fez. Braid. The Stanley Parable. Minecraft. All that popularity means they’re set, right? They can make cool games, and do what they want. Life is good. It’d feel natural to put Dwarf Fortress, a game so important that it was placed into the Museum of Modern Art alongside games like Tetris, in that category, right? Not true.

Which is not to suggest they’re broke, either, but their relationship with money is complex.

“It’s one of those things that’s hard to talk about, because when you say very little money— compared to some of our peers, it’s a ton of money,” said Tarn. “Compared to people that people compare us to, it’s absolutely nothing. Compared to where we want to be, we’re pretty good, which is why we haven’t really gone and tried to sell the game on Steam.”

Here’s a huge part of the problem, so to speak: Dwarf Fortress is free, and support has always been a donation-based endeavour. For a long time, fans could set up a one-time or recurring PayPal donation (they suggested $10), but it was tucked away on their website, and drumming up interest was never a priority, both out of a desire to avoid exploiting their fans and because, as they admitted themselves, they don’t know a thing about marketing.

The numbers, relative to other crowdfunding endeavors, weren’t impressive. $3,400 in November 2014. $4,727 in October 2013. There were spikes, of course, around the holidays, like the leap to $8,181 in December 2014. But Tarn and Adam made (and still make) the mistake of publishing their raw donation totals, which skews how much people think they’re actively being paid every month. $3,400, for example, is meant to be split between two people, and that’s before taxes, expenses, and other fees that eat away at the number. It’s actually a lot less.

“When you say very little money— compared to some of our peers, it’s a ton of money. Compared to people that people compare us to, it’s absolutely nothing. Compared to where we want to be, we’re pretty good, which is why we haven’t really gone and tried to sell the game on Steam.”

It’s money to live on, but it’s not lavish, and things got weird when, for reasons likely due to randomness more than anything else, donations dropped a full thousand dollars from one month to the next in early 2015, from $4,000 to $3,000. They began touching their meager savings, mildly panicking, and wondering what their alternatives might be. Enter, Patreon.

“When we signed up for Patreon,” said Tarn, “It was up to $2,000 on the second day. ‘Oh, wow.’ It was like…the big orange button really helped? Our PayPal subscriber thing is like this mess of dropdown menus, but having a big, orange button can change your life.”

Patreon provided some measure of stability, but eventually proved not enough. But the obvious next step was not easy for the two. Tarn and Adam were deeply concerned about the Steam announcement. Would fans call them sellouts? Would people drop Patreon support, stocking money for the Steam release?

“The Patreon actually went up,” said Tarn, “which is something we hadn’t even considered. [laughs]”

As of this writing, there are 2,540 patrons supporting at $6,999 per month. It jumped more than $1,000 per month between the news breaking and today, and continues to rise. The people who love Dwarf Fortress really love Dwarf Fortress, and are eager to show support. There is no indication they feel exploited.

I heard about Zach’s health scare from a fan who’d sent a message over Twitter, and when I’d pitched an interview about the topic to the person handling public relations for the brothers, they suggested it might not fly; from the start, I was told, they almost didn’t share the news with fans. In my interview, it was clear Tarn and Zach were—and are—cautious about their relationship with fans. They need more money, yes, but they’re not sure how to ask for it.

“When I first disclosed that I had that surgery,” said Zach, “I told everyone ‘Do not give us money’ because I didn’t want to start a big fundraiser to pay for something that I didn’t have to pay that much for,” he said. “But, then, the money started mattering because I was getting billed for it [the surgery and recovery]. And then the whole thing with Tarn, where it’s like… if it happened to him, we wouldn’t have money at all, and the whole thing would get shut down. That became a big wakeup call.”

On one hand, status quo. On the other, the potential end of Dwarf Fortress, a life’s work. And they had more to consider now, too, with Zach having gotten married. It’s not just them anymore.

“My wife has goals,” joked Zach.

“We just want to make video games, and even that’s selfish,” said Tarn. “A lot of people can’t realize what they want to do artistically because the economic setup. That’s most people. It’s just stuff that bothers us perpetually, naturally.”

Their conservative nature is, in all likelihood, an intangible part of Dwarf Fortress’ success, but with its own set of drawbacks. That said, the decision to release a Steam version with upgraded graphics and new music may not only give Tarn and Adam the financial security to make it through a sudden appearance of cancer—or a dead laptop—but it’s also opening their eyes to the notion of collaborating with people outside of the tiny world of one another.

“We seem to be in a constant state of pleasant surprise,” said Tarn. “It seems like something with how we grew up. Our parents didn’t have a lot of friends coming in and out of the house, or something. This whole society thing actually works better than we thought. [laughs]”

Dwarf Fortress is planned to be released on Steam… eventually. The game itself has no planned end. Dwarf Fortress, like life itself, goes on. Until it doesn’t.

Follow Patrick on Twitter. If you have a tip or a story idea, drop him an email: patrick.klepek@vice.com.

Have thoughts? Swing by Waypoint’s forums to share them!