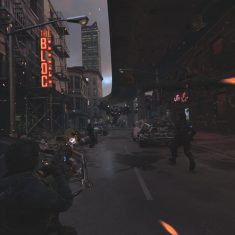 In 2015 Epic Games released the UE4 project source code and assets of ShowdownVR for free ( Thank you! ), announced in this UnrealEngine blog post : Showdown Cinematic VR Experience Released for Free!

The project is current listed to be compatible with “Oculus DK2 and above, Sony PlayStation Morpheus and HTC Vive SteamVR on high-end PC’s.“.

Since I’ve just got a brand new Oculus Quest and had my share of learning studies about UE4 Packaging and distribution, I tried to package this project to Oculus Quest and to my surprise it did run on the 1st try! The project need a touch of care to fix some textures and the smoke trail that isn’t compatible with OpenGL 3.1 and some improvements on the framerate but overall it worked great. I’m sharing it here if anyone else is interested in try it out.

Let Me Fix It For You…